Estuary restoration best achieves project goals compared to the other alternatives considered, has the broadest stakeholder support, and provides other environmental benefits. Project goals are improving water quality and ecological functions, managing sediment accumulation, and enhancing community use. The restored estuary is the only alternative that can achieve state water quality standards.

Under the Estuary Alternative:

Under existing conditions, the waterbody suffers from accumulating sediment, violations of water quality standards, a dense community of aquatic plants, and invasive plant and animal species that have resulted in restrictions to active recreation. Neither short-term actions like dredging nor long-term management strategies could move forward without this EIS.

Gov Jay Inslee said, "The Final EIS is a milestone that marks decades of work by state and local agencies, in coordination with the Squaxin Island Tribe. I appreciate the commitments and efforts of everyone to ensure these plans help improve the ecosystems that support Chinook salmon and Southern Resident orcas."

Squaxin Island Tribe Chair Kristopher Peters said, "The Deschutes Estuary has long-standing cultural and spiritual significance to the Squaxin Island Tribe. Restoration of the Deschutes Estuary is a meaningful step toward the larger effort to improve the health of the Deschutes Watershed for native species. It also compliments Department of Ecology water quality improvement plans for the upper watershed and in Budd Inlet and Port of Olympia plans to address contaminated sediment."

DES Director Tara C. Smith said, "The state has been seeking a path forward to address issues in Capitol Lake-Deschutes Estuary for more than two decades. It has been important to me and my agency to have a thoughtful and robust approach to identifying a preferred alternative that merges science and stakeholder input. This is a powerful example of what we can accomplish together, especially when the state works in collaboration with Tribal governments and local communities. I would like to thank all of our advisory groups, our community sounding board, and everyone who took the time to give feedback throughout the EIS process."

DES convened three advisory groups and a Community Sounding Board during the EIS process, which began in 2018. The work groups include representatives from the cities of Olympia and Tumwater, Thurston County, the Squaxin Island Tribe, LOTT Clean Water Alliance, the Port of Olympia, and DES, with participation from the departments of Fish and Wildlife, Archaeology and Historic Preservation, Ecology, and Natural Resources, and ad hoc representation from the U.S. Army Corps of Engineers. DES also sought extensive community feedback during the EIS process.

Olympia Mayor Cheryl Selby said, “In 2021, the City of Olympia passed a resolution in favor of the Estuary Alternative outlining its broad benefits to the community. Estuary restoration is best aligned with our regional climate adaptation goals and would help reduce flooding in downtown Olympia. Removing the 5th Avenue Dam and freeing the Deschutes will also begin to address the social justice and equity impacts to our local tribes and is a rare opportunity to restore scarce tidelands and the overall habitat of the Salish Sea. We are fully in support of this decision and have signed the MOU that outlines the funding and governance framework for future maintenance. We look forward to moving swiftly into and through the design and permitting process.”

Washington State Department of Ecology Director Laura Watson said, “Increasing oxygen levels in South Puget Sound will help salmon, shellfish, and other aquatic life. We worked with our state and local partners to investigate potential options to address these concerns, and we all agree that restoring the Deschutes Estuary is a critical component in a comprehensive water quality improvement plan for Budd Inlet.”

DES identified the Estuary Alternative as the Preferred Alternative for long-term management based on findings from 14 technical analyses that evaluated potential changes to the natural and built environments, through engagement with the Squaxin Island Tribe, local governments, and the community; and after review of more than 850 comments received on the Draft EIS issued in the summer of 2021. DES and its stakeholders identified the project goals that any alternative should fulfill in a Phase 1 process that lasted the majority of 2016. 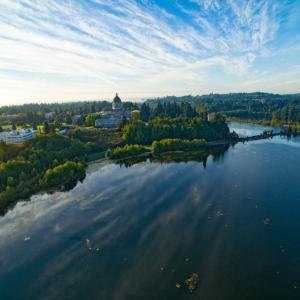