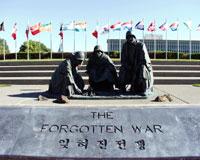 East Campus Plaza next to the Capitol Way skybridge

It was in 1989 that the Washington State Legislature, at the urging of numerous veterans’ organizations, business owners, and citizens, authorized the first ever state-sponsored Korean War Memorial. The project was approved for two purposes: 'to express the gratitude of the citizens of this state for all who served in Korea, and to project the spirit of service, willingness to sacrifice, and dedication to freedom in remembering those Washingtonians who lost their lives in the war.' Roughly 122,000 Washington soldiers served in Korea, now often referred to as 'the forgotten war'—532 of these troops were killed.

Once approval was granted for the memorial, a four-year fundraising effort ensued. Veterans groups worked tirelessly to raise more than $320,000 in private donations needed for the $400,000 project, with the state contributing $70,000 in matching funds. Spearheading the fundraising effort was the veterans group Chosin Few, comprised of survivors of one of the war’s bloodiest battles at the Chosin Reservoir (November, 1950).

Montana artist Deborah Copenhaver Fellows’ idea was chosen for the memorial after a three-month design competition. Fellows, whose father is a Korean War veteran, created her piece 'as a way for people to reflect on war and the price it extracts from those who participate.' Her two-ton bronze statue features three weary-faced GI’s of different nationalities huddled around a pile of sticks in the rain, with one soldier attempting to light a fire. Behind the figures fly 22 flags, representing each of the nations that joined the U.S in the war effort. In front of the bronze statue are stone tablets with the names of those Washington soldiers killed in battle. On either side of the memorial are plaques designed to educate viewers about the war.

The memorial was dedicated on July 24, 1993, just days away from the 40th anniversary of the end of the Korean War. Nearly 3,500 people attended the ceremony on the east campus of the State Capitol. Before arriving in Olympia, the statue made a number of viewing stops in Eastern and Western Washington en route from Fellows’ Montana studio. The memorial originally contained the names of 523 Washington residents killed in Korea, with more names added in 1994, 1998, and 1999.

The Korean War began on June 25, 1950, when the North Korean Army invaded the Republic of (South) Korea. Three days later, President Harry Truman ordered U.S. troops to help defend South Korea. Soon, for the first time in history, the United Nations created a United Nations Command to repel the attack. The war officially ended with an armistice roughly three years later, on July 27, 1953. A de facto boundary was drawn up at this time that still exists today, dividing North and South Korea. Approximately 1,500,000 American troops served in Korea during the conflict, nearly 53,000 of whom lost their lives. A total of 580,000 United Nations troops were killed, and 1.6 million communist (North Korean and Chinese) soldiers were killed or wounded.