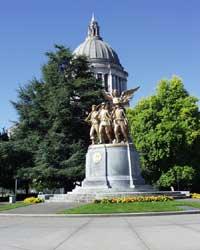 Northeast of the Legislative building, in the center of the west campus drive around circle.

East face: WA State Seal, 'To the memory of the citizens of the State of Washington who lost their lives in the service of the United States during the World War 1917 – 1918',

North face: 'Greater love hath no man than this, that a man lay down his life for his friend'

West face: 'Their sacrifice was to vindicate the principles of peace and justice in the life of the world'

South face: 'They fought to safeguard and transmit to posterity the principles of justice, freedom, and democracy.'

The Winged Victory Monument, honoring those who served in World War I, was first conceived in 1919. It was then that Governor Ernest Lister proposed to the State Legislature that a memorial be constructed to honor the soldiers, sailors, and marines from the state who lost their lives in this war. The legislature, in response, passed a bill appropriating $50,000 toward the cause. It took a number of years for this money to be put to use however, and it was not until 1927 that sculptor Alonzo Victor Lewis’ initial plans for the monument were approved.

Lewis was an artist born in Utah and moved to Washington at an early age. He had already completed a number of other well-known pieces of public sculpture prior to his selection for the WWI Monument (such as The Doughboy in the Veteran’s Section of Evergreen-Washelli Cemetery in Seattle), and was considered one of Washington’s finest sculptors. So respected was his work that in 1939, shortly after completion of Winged Victory, he was named Washington Sculptor Laureate by the State Legislature.

Lewis’ design for the war monument was well-matched to the classical architecture of the surrounding, then newly-constructed capitol buildings. He chose to include a 12-foot tall figure of the famous Greek statue of Nike of Samothrace, the goddess of victory at war. She stands protectively behind the roughly life-sized figures of a sailor, soldier, and a marine (representing the three main forces of America’s World War I machine). Also included is a Red Cross nurse who follows the three men with a medicine kit slung over one shoulder.

The four human figures appear to be marching away from the Capitol Group toward the distant horizon in the east. Winged Victory, or Nike, holds an olive branch in her right hand, extended over the heads of her 'chosen ones.' The bronze figures stand on an approximately 10-foot tall granite base, inscribed on four sides with words honoring those who gave the ultimate sacrifice in the First World War. 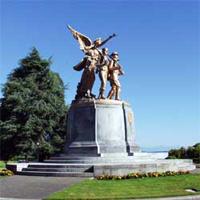 The impressive monument was completed in 1938, and dedicated on Memorial Day, May 30, 1938. During the formal ceremony, two Gold Star mothers, after whose fallen sons the Olympia posts of the American Legion and Veterans of Foreign Wars are named, unveiled the statue. The monument was financed by a combination of funds amounting to $100,000. Most of the money came from the sale of state timberlands, with the rest provided through a federal grant.