Northeast of the Legislative Building, alongside Capitol Way on the west campus. 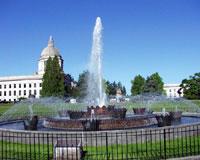 The idea for adding this spectacular fountain to the Capitol Campus was first conceived by Peter G. Schmidt during his visit to Copenhagen, Denmark in 1949. It was at that time that Schmidt, then-president of the Olympia-Tumwater Foundation (a privately-funded organization created for the advance of recreational, benevolent, and educational projects for the state of Washington) was especially taken with a large fountain he saw there. This fountain, it turned out, was a copy of one located in Tivoli, a town about 16 miles east of Rome that contains one of the finest surviving examples of a garden from the Renaissance period in Italy.

It was Danish designer Fritz Meyer who duplicated one of the large Tivoli Garden fountains for the park in Copenhagen, which came to bear the Tivoli name due to the addition of the replica fountain. Schmidt recalled later his feelings that the state capitol campus lacked a key landscape attraction, and it struck him that another replica of the impressive Roman-style fountain was just what the Washington State capitol grounds needed.

Schmidt purchased many of the essential parts for the fountain before returning home to Olympia where his fellow Olympia-Tumwater Foundation members enthusiastically accepted the idea for the fountain’s construction. The foundation offered the fountain as a gift to the state of Washington, and it was accepted by joint House and Senate resolution on February 1, 1951.

Construction of the 50-foot diameter fountain began soon after the legislature's approval. Fritz Meyer, designer of the Tivoli Gardens fountain in Denmark, helped by manufacturing and shipping specifically designed parts from Denmark to Olympia with plans for their erection. Wohleb, Wohleb, and Bennett served as coordinating architects for the project. The fountain was completed for its dedication on April 15, 1953 when then-Governor Arthur B. Langlie publicly accepted the gift on behalf of the State.

The fountain features a 50-foot diameter outer ring with 270 individual nozzles that create an umbrella of water. Within this outer ring are two additional rings of 14 vertical spray jets that rise from large, tulip-shaped copper baskets. In the center of the fountain is its most striking feature -- a central spout that shoots water approximately 25 feet into the air. All of the sprays alternately rise and fall following seven different artistic water displays, while circulating 600 gallons of water a minute.

The original fountain had 540 nozzles in the outer ring. In a 2017 restoration, these were reduced in number and the apertures enlarged, to send out fewer but stronger streams of water. This alteration significantly lessens water loss caused by evaporation, and also reduces clogging, which reduces maintenance – with no noticeable change in aesthetics.

2003: Tivoli Fountain celebrated its 50th birthday on April 15, 2003, but was emptied soon afterwards for the first of a series of repairs. Following a comprehensive assessment, the fountain’s original pumps – installed by Olympia Brewing engineers and mechanics – were replaced, along with the electrical service and control valves at a cost of $100,000. A multi-phased plan was developed for the additional needed repairs.

2005-2006: Tivoli was found to be losing as much as 2,000 gallons of water per day through evaporation, wind spray and leakage. A second round of repairs was undertaken at a cost of $290,000 to seal the fountain’s concrete walls and floors, caulk and repair joints, replace additional valves and drains, and install new electrical conduits. All of the original 1953 piping beneath the fountain remained untouched.

2009: Because the weight of falling water causes continual abrasion and corrosion to the fountain’s sculptural copper “crowns,” which resemble bundles of rushes or leaves, Enterprise Services replicated the crowns in new copper with stronger framework, bolts and brackets. The original copper had been replaced entirely in 1986, and repeatedly repaired since that time. Also within this phase of repairs: New jets were installed in the center basin, the pump house received a new roof and door, cathodic protections to slow corrosion were renewed, and historic concrete benches were re-installed. The project cost was $331,000.

2014: The fountain was again found to be losing significant quantities of water, and was turned off and emptied before the end of the summer operating season. Funding was requested to assess the problems and continue repairs.

2015: The fountain remained empty in witness to a statewide drought emergency, but funding was provided and design work was undertaken for comprehensive renovations to address water loss and extend the life of the fountain. The design work is included in the overall 2017 project cost below.

2017: A repair project updated the popular campus attraction's operational systems to use less water and energy and require less maintenance. The $909,000 project:

2019: Circuit boards for the fountain's LED lighting are repaired or replaced after being damaged by a weather related storm surge in 2018.