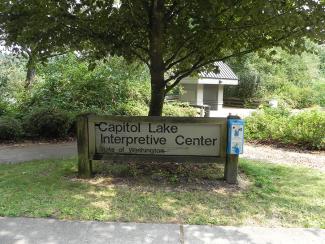 Rulemaking efforts have begun to adopt enforceable restrictions on parking on the Capitol Campus, with a focus on Deschutes Parkway. DES is committed to developing an implementation plan in coordination with regional and community partners along with the rule. Learn more.

Deschutes Parkway is a 1.68 mile state-owned roadway that threads along the western shore of Capitol Lake at the base of a heavily wooded hillside. This roadway corridor between Tumwater and Olympia has a jogging path that is extensively used by walkers and runners. The Parkway links together pathways around and along Capitol Lake, and provides connections to downtown Olympia, Tumwater Falls Park, Heritage Park, and the Capitol Lake Interpretive Center.

The Interpretive Center was originally constructed in 1979, with the dredging of Capitol Lake and the creation of an adjacent wetland area. Pedestrian pathways from the Interpretive Center connect through these wetlands, following the Deschutes River estuary to Tumwater Falls Historical Park immediately to the south. 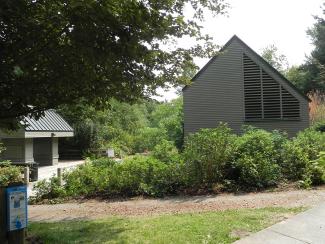 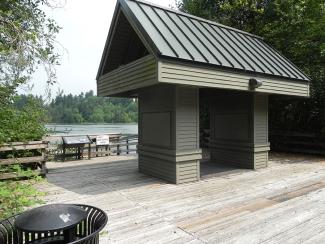 The pedestrian pathway along Deschutes Parkway features a cinder path at the street edge, favored by runners. As visitors move northward around the Capitol Lake edge, unfolding views feature the colorful urban setting of downtown Olympia, with Puget Sound and the Olympic Mountains as a backdrop. Southbound visitors will experience the nearness and richness of our state’s natural environment, with the wooded hillsides surrounding the state capitol building, and the interwoven river–to-sound, lake, and wetlands ecology and wildlife. Leashed pets are as populous as strollers on Saturday mornings.

The Interpretive Center features covered kiosks, a generous-sized dock for lake access, and a restroom facility. It provides visitors with an experience that contributes to their understanding of our natural systems. Interpretive signs provide information on native plants along the trail. It is one of the most unique components of any state capitol in the nation. 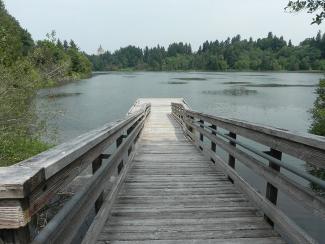 Development of the Capitol Lake Interpretive Center was made possible with the 1979 dredging of Capitol Lake. In that project, an 18-acre, two-cell dewatering basin was created to process the spoils of future dredge operations. A much smaller dredging operation in 1986 utilized the basins for this purpose. A third dredging operation planned in the mid-1990s was prevented, however, because portions of the dewatering basins had naturally evolved, were determined to be wetlands, and could not be disturbed.

The construction of Heritage Park in 1997 included the designation of these 18 acres as an Interpretive Center with a commitment by the state to establish and maintain a high quality wetlands in the former dewatering basins. These new wetlands mitigate the loss of open-water habitat and the expansion if the park grounds into formerly submerged lake areas.The 2001 Nisqually Earthquake caused considerable damage to the area. However, reconstruction provided an opportunity for considerable improvements.

A diverse mix of native plants support and sustain a rich diversity of wildlife here. Numerous community groups as well as tribes participated in planting activities.