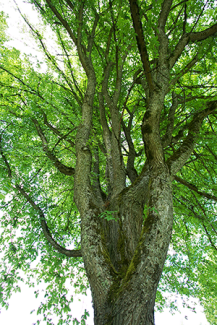 Central and eastern areas of United States and Canada

History and significance:
This tree and a younger elm to the west were grown from cuttings from a Massachusetts white elm. Legend has it that Gen. George Washington was standing under a white elm tree in Cambridge, Massachusetts, when he took command of the Continental Army on July 3, 1775. After he became president, that elm tree became a celebrated symbol of patriotism. The Washington Elm died in 1923, at about 210 years old. This elm tree came from a rooted cutting of that famous elm, obtained in 1896 by a University of Washington alumnus doing graduate study in Cambridge. UW botany professor Edmund Meany planted the cutting from the Massachusetts tree, and took cuttings from it as it grew. This tree was one such cutting, planted on the Capitol Campus on Feb. 18, 1932, on the 200th anniversary of George Washington’s birth. The smaller elm just west was planted from a 1979 cutting.