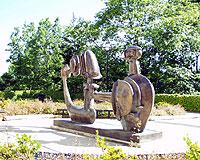 When the WA State Highway Commission approved construction of the new State Highway Administration Building (later renamed the Transportation Building) on the East Capitol Campus in the early 1960’s, they were encouraged by the State Arts Commission to include funding for artwork to adorn the new structure. In response, an arts budget amounting to one percent of the total cost of construction was approved as part of the project. Using these funds, the WA State Arts Commission then commissioned six models of outdoor sculptures from 14 artists interviewed, the criteria being that the artworks be 'compatible with the building and plazas in scale and materials, even though clearly having a life of their own.' Additionally, sculptures were to be maintenance-free.

From the six models produced, two were selected by the Arts Commission for recommendation to the State Capitol Committee (comprised at the time of the Governor, Lieutenant Governor, and State Lands Commissioner). One of these was the small-scale version of The Shaman, a bronze sculpture by Vancouver artist James Lee Hansen. At the time, Hansen was described as one of the most talented artists in the Pacific Northwest, whose credits included a bronze piece installed in the Federal Savings and Loan Building in Vancouver, WA, as well as numerous works in churches and museums all over the West Coast. He found inspiration for his work in Chinese bronzes as well as Native American totemic sculpture.

The Capitol Committee eventually approved Hansen’s abstract form depicting a prehistoric Indian medicine man, but the decision was not without controversy. Then-Lieutenant Governor John Cherberg put up strong resistance to The Shaman, saying that the $21,000 needed for its purchase would be better spent on other areas such as education. Additionally, a number of State Highway Commissioners and citizens voiced concern over The Shaman’s non-traditional nature. Despite these objections, Hansen was hired and a 14-month process to create the sculpture ensued.

Hansen chose to use a 'lost wax process' to create his sculpture. Lost wax is a technique whereby a plaster mold is made from a clay original of the sculpture. This mold is used to cast a wax replica of the original clay. Wax coils surrounded by a plaster 'investment mold' are then attached to provide a passage for molten bronze to enter the casting cavity once the wax is melted out via heating. Due to The Shaman’s large size (the sculpture stands eight feet high and is thirteen feet long), it was cast in 12 major sections and then welded together. 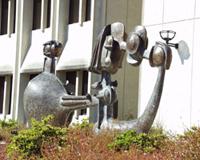 The Shaman was delivered from Hansen’s studio on October 8, 1971 and fitted into place outside the Highways Building by a large crane. Hansen hoped that his work (its theme being 'the enduring spirit of inquiry') would inspire observers to ponder the question 'who and what are we?' posed by the medicine man it depicts.