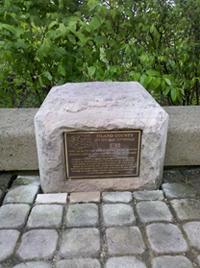 Heritage Park. The county markers can be found along the 'Arc of Statehood' at the eastern edge of Capitol Lake, mounted on blocks of sandstone that are part of a low wall along the pedestrian pathway.

The county markers project was conceived and promoted by the North Capitol Campus Heritage Park Development Association. The markers were fabricated and installed in 2002 with the additional support of the Thurston County Board of Commissioners, the General Federation of Women’s Clubs, the Washington Association of Former County Elected Officials, and numerous private and public donors.

View the inscription text for a county by selecting the county name below.

The markers have weathered inconsistently leading to some loss of legibility; but overall they continue to be in good condition.

In 2002 an interpretive sign that tells about the county markers was added at the crosswalk near the corner of 5th Avenue and Simmons Street.

The markers and the stones are gently pressure-washed annually.