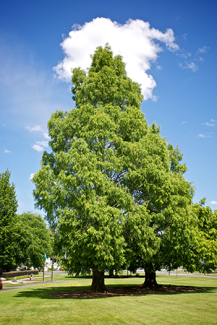 Middle of West Campus, on the Great Lawn

History and significance:
These trees, native to China, were grown to replace a sequoia that died after it was planted in 1980. These Chinese cousins of the mighty California sequoias were thought to be extinct, but were discovered growing in remote China in the 1940s. They grow quickly into immense trees. Their botanical name of metasequoia means "changed sequoia." True sequoias are evergreen, unlike this species, which drops its ferny needles every autumn.